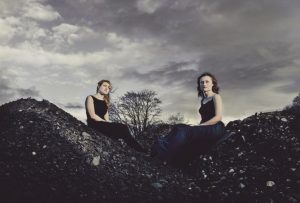 Emily and Hazel Askew are fast becoming one of the most popular and respected duos on the English folk scene.

From dark ballads to uplifting dance tunes, they play with driving energy and the unity of two people who have played together all their lives.

The sisters use fiddle, melodeon and concertina to breathtaking effect, creating cinematic arrangements that get to the very heart of each song. These create a perfect setting for Hazel’s striking voice, which won her Best Female Singer at the Spiral Earth Awards 2011.

Emily and Hazel’s latest album, In the Air or the Earth, was released by RootBeat Records, to widespread critical acclaim, including the Spiral Earth Award for Best Traditional Album 2015.