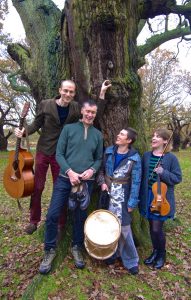 Innovative band Stepling has been delighting audiences everywhere with their unique blend of music, step dance, and song inspired by English traditions.

“Stepling … Wonderful musicianship, dynamic step-dancing and great programming make them one of the most engaging units I’ve seen and heard for a very long time.” Barry Goodman

“…it was a rare pleasure to see the clog shod feet of dancer Toby Bennett in full flight. The speed and complexity was breathtaking at times and the accompaniment from Deb Chalmers on fiddle and vocals, Jo May on spoons and other percussion and guitarist Adrian Lever was equally impressive.” Andy Nelmes, Fatea Magazine

he most engaging units I’ve seen and heard for a very long time.” Barry Goodman