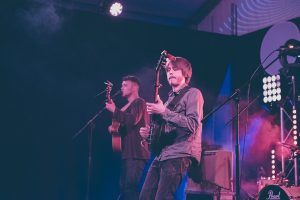 Multi-award winning folk musicians Sam Kelly and Jamie Francis met at university in
Brighton in 2010 and discovered a common interest in roots music, so began writing and
jamming together.

They started performing at open mics and venues around Brighton as a duo, performing
original folk and blues songs. Fast-forward 5 years, many part-time jobs and dingy
apartments later and they have become two of the most well respected and innovative
musicians on the UK folk scene, and the main writing partnership behind the hit folk band
Sam Kelly & The Lost Boys. Naturally, the lives of two young musicians who have absolutely no idea what they´re doing became choc-full of many colourful experiences (including Sam auditioning for ITV´s Britain´s Got Talent whilst in London for a gig, and ending up getting all the way to the final). They still perform together at folk clubs, venues and festivals, performing inventive interpretations of tunes and songs in between humorous anecdotes and stories of their misadventures.