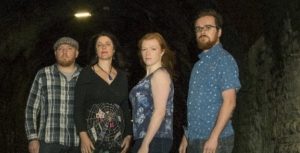 Road Not Taken play a mixture of traditional and contemporary songs, in their unique, melancholic style.

Road Not Taken are a folk collective made up of singer Anita Dobson, singer and guitarist Ant Miles, fiddler Claire Hamlen, and multi-instrumentalist Joe Hamlen. For some gigs. we are joined by Joe Brydon on slide guitar and harmonica.

Based near Bristol, the band came together through Downend Folk Club, and soon found themselves supporting India Electric Co and headlining a local showcase event at the club.

Appearances at Bristol Folk Festival and The Great Big Almonry Folk Weekend followed, and the response was so good that something which started life as a hobby began to grow, and the band hatched plans for an EP. ‘Back Into Storyland’ was released in Spring 2016.