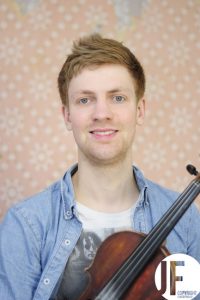 James comes from a family of folk singers and his enthusiasm lies firmly within the English tradition. He is particularly passionate about songs from his home counties of Dorset, Somerset and Devon. He couples this with an extensive repertoire and love for song that shows through his knowledge and understanding of the material.

“Bloody hell, what a voice! This was my first thought as he launched into his songs. He’s warmly charismatic with that sparkle of personality that draws a crowd along with him.” – JON BODEN

James has recently been involved in some high profile projects. These include the recording of songs from ‘The New Penguin Book of English Folk Songs’ with Lucy Ward, Bella Hardy and Brian Peters; playing ‘Little Musgrave’ in Jon Boden’s folk-opera ‘Little Musgrave and Lady Barnard’, and also working with the British Council’s Folk Nations project in India. James also has two highly acclaimed albums out with Fellside: ‘Sport and Play’ and ‘Another Day Another Story.’ Sport and Play was in MOJO’s list of top ten folk albums of 2012 and Another Day Another Story was nominated for ‘Best Folk Album 2013’ in the Spiral Earth Awards.