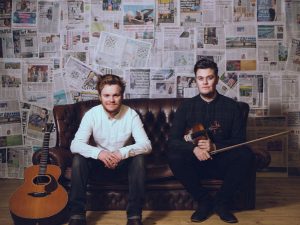 Two time BBC Folk Award winners Greg Russell and Ciaran Algar met in 2011. Soon after the joining of the pair, the duo were signed to Fellside Records and in July 2012 released their debut album, The Queen’s Lover. Numerous tours followed as the duo developed and honed their stage craft, becoming one of the most sought after young acts on the English Folk Scene. “The press coverage and folk club reports have been glowing and rightly so” (R2 Magazine).

After recording their second album in the November of 2013, again with Fellside, Russell and Algar received the Horizon Award for Best breakthrough act at the 2014 BBC Radio 2 Folk Awards. The second album, The Call, was then released in July receiving 5 Stars in fRoots, 4 Stars in both R2 Magazine and The Telegraph and a host of other brilliant reviews, Bright Young Folk describing it as an “outstanding show of maturity” with “enormous promise”.

In 2015 the duo were nominated for Best Duo at the Folk Awards and followed that with a full year of touring the UK and Europe. The released their third album, ‘The Silent Majority’, in March 2016.