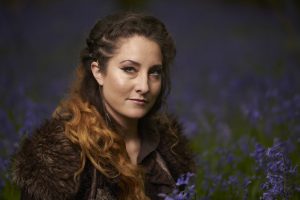 Georgia Lewis is a “young, exuberant & musically adept” (R2 Magazine) folk singer and multi-instrumentalist with “the stage assurance of a veteran … she is fast becoming one of the most in demand artists on the club and festival circuit.” (Eastbourne Folk Club).

Georgia Lewis is an up-and-coming folk singer with a penchant for taking well-worn ballads and adding a little spice! She is joined onstage by Felix Miller (guitar) & Rowan Piggott (5-string fiddle) and together they are garnering attention on the English folk scene with their signature panache!

In 2015 Georgia Lewis and her trio released her self-titled 5-track EP. Since then they have performed at festivals and folk clubs in the south of England and received air-play on national and internet radio stations including ‘The Folk Show with Mark Radcliffe’ on BBC Radio 2 and ‘Mike Harding’s Folk Show’. In 2015 Georgia won ‘The Future of Young Folk Award’ at Bromyard Folk Festival and later won ‘Ely Band Competition’ at Ely Folk Festival. In 2017 Georgia released her debut album ‘The Bird Who Sings Freedom’, recorded in her parent’s kitchen, featuring five musicians and co-produced with Josh Clark (Kate Rusby). Although an artist in her own right she also performs with many known ceilidh bands and is an experienced session player. She plays whistles, accordion, piano, guitar, sings and has been seen tapping out various traditional dancing styles.