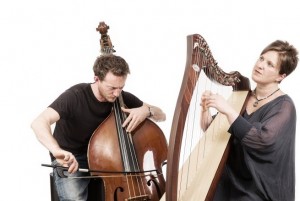 Since she burst onto the folk scene in 2013 with her stripped back album ‘Bare Foot Folk’ Ange Hardy has continued to release a 14-track album every year. The 2014 release of ‘The Lament of The Black Sheep’ led to Ange being nominated at the BBC Radio 2 Folk Awards which provided the platform for writing and releasing ‘Esteesee‘ in 2014.

The ‘Along the Coleridge Way’ tour which accompanied the release of Esteesee saw Ange Hardy and Lukas Drinkwater performing live as duo for the first time, and the unanimous feedback night after night was that the two are exceptional musicians but that together they form a jaw dropping duo greater than the sum of its parts.

For those unfamiliar with the musical genius of Lukas, he has been labelled as one of the hardest working session musicians on the folk circuit. The last few years have seen him performing in a duo with regular BBC Radio 2 Folk Award nominated Jim Causley, as one half of a duo with Tobias ben Jacob, with European festival favourites Tankus the Henge and 3 Daft Monkeys, playing Jazz percussion for Lisa Marini, performing with The Little Unsaid and recording countless sessions with esteemed funk & soul producer Lack of Afro. Twice last year he performed live on the BBC Radio 2 Folk Show and on top of that he’s found time to play as a session musician for Lucy Ward, Sam Kelly, Hollie Rogers and many more – not to mention performing on Ange Hardy’s last two albums and at their respective album launches.